N.B.: Info on this page may be outdated

This information is left here as a historical record.

Seattle Labor Chorus
Formed in March 1997, the Seattle Labor Chorus is “a nonprofit organization dedicated to economic and social justice, and the fundamental right of all workers to organize as a means of securing a living wage.” Directed by Janet Stecher, an experienced vocal performer and recording artist.
http://seattlelaborchorus.org/

Fruit of Labor Singing Ensemble
The cultural arm of Black Workers for Justice, this chorus has been organizing in communities and workplaces for more than 20 years of writing songs and creating music from many ethnic groups of people and co-workers’ struggles.
http://www.fruitoflabor.org

Côr Cochion Caerdydd
The Cardiff Reds Choir came together in 1983, when events in Chile, South Africa, and at home in Wales demanded that they use their voices in protest. Since then, they have raised many thousands of pounds and campaigned in support of peace, justice and freedom in Britain and around the world.
http://www.corcochion.org.uk/

Nottingham Clarion Choir
Nottingham Clarion Choir was formed in 1988 as a result of a project of local musicians to make the vinyl album “English Rebels”, celebrating the radical traditions in British politics. We enjoyed singing so much that we stayed together and are still going strong.
http://www.nottinghamclarionchoir.org.uk/

Charm City Labor Chorus (Baltimore)
“The Charm City Labor Chorus was founded in 2008 in Baltimore to complement the rich labor culture of the region. Under the direction of Darryl! L.C. Moch, we sing songs that come out of the labor and civil rights movements and the struggles for peace, justice and equality.”
http://www.charmcitylaborchorus.org/

Twin Cities Labor Chorus
“The Twin Cities Labor Chorus was started in January, 2009, with two organizers, and has grown to nearly 30 members. We sing music ranging from ‘The Little Red Song Book’ to contemporary and original labor music. Our mission is to empower the labor movement and reclaim protest and social justice music from the forces that would commodify it for profit. Also, to promote singing amongst union members and the public as a tool for building community and magnifying our collective power.”
http://twincitieslaborchorus.blogspot.com/

We are available for performances at union and community events. Contact Pat Wynne at 415-648-3457 or by e-mail.

We are available for performances at union and community events. Contact Pat Wynne at 415-648-3457 or by e-mail. 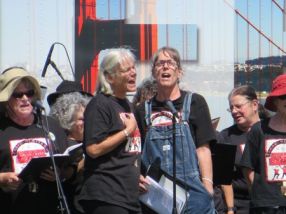